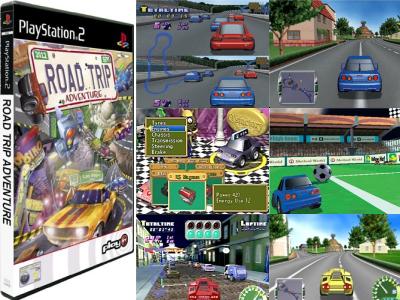 I know this sounds like some manner of educational grotesque that you would find Barney the dinosaur pontificating about, but…close your eyes and think of an RPG. Do NOT think of Drew Barrymore and a candlestick. What do you see? Elves? Dwarven warriors? Beards? Greasy social misfits tossing dice on a rainy Sunday (yes, I said dice)? Swords with +4 damage against undead? All standard RPG trappings and fare, but you forgot one thing. Cars. Road Trip Adventure (RTA) is an RPG about cars. Those 4-wheeled conveyances are everywhere these days; ‘80s futurist Gary Numan may have felt safe in his car (‘it’s the only way to live’, allegedly), but now they are invading our genres. I can imagine stalwart gamers writing angst-filled invective to their favourite magazine and the Daily Mail (‘Ban this sick ‘car in RPG’ filth now’). So, what we have is not an RPG, but a CAR-PG; a curio of a concept and, better yet, it’s an oddball Japanese game, which means winsome midget cars and amusingly translated English. Let’s go fun happy time; a winner is you! All your mini car are belong to us.

The road trip is ‘the great American adventure’, the cornerstone of the beatnik generation and ‘Easy Rider’ cool. It conjures up images of Jack Kerouac, freestyle poetry, dingy hotels, fast women and passing out intoxicated in gutters in no-name American backwater towns. Alas, Road Trip Adventure is not a beatnik simulation game, although the possibilities therein are limitless. RTA is an iteration of the very successful Choro-Q series from Japan; minute, cute cars and velocity – you know the score. You may even have sampled the obscure and dwarven delights as it was released as Penny Racers on the PSX a few years ago. But these were formulaic racing games; a mere precursor to the reality-contorting wonders of RTA.

To play RTA is to experience Micro Machines on acid. It is as if you have stepped through the looking glass, Alice, and entered a world of distended surrealism and ‘mad Jap’ innovation. Just looking at the very concept of RTA makes me want to weep for the lost days of home computer gaming when original concepts like this were the norm. In this contemporary age, it seems that it is only Japan that innovates and pushes the boundaries of reality and depth in games, whilst Europe and America churn out endless homogenised FIFA and Tomb Raider product. It’s as if George Orwell himself has a crafty hand in modern Western game design. Although the uncanny aesthetic of RTA will alienate many gamers who eschew anything ‘cute’, those willing to take the gambit (and for a tenner, it’s a win/win gambit) will find an incredible, compelling and genuinely refreshing experience. If a little disturbing in places.

Following the gameplay paradigm of RPG games as a whole, part of the game will be spent revving about towns like some kind of Chorlton and the Wheelies extra. You are a talking car, and you shoot the breeze with other talking cars. I would like to know what they put in the water over in Nippon. In a manner not very civic minded, you open a conversation with another car by driving into it (no insurance problems here). That being said, calling them conversations is a little optimistic, as you more often have orders barked at you: ‘I want this…get me this!’ You can also barge into the house of another car and they will be very helpful; personally, I would beat the crap out of any stranger who burst into my home and started asking questions about garages. Super-deformed, cutesy talking cars; what’s the point? Aside of psychological damage, the aim of the game is to become the president of the world, and this noble goal is achieved not by political wrangling or assassinations, but by screwball quests. I’d love to see that in this country…imagine Tony Blair having to herd animals to win his leadership.

Given that there are in the region of 100 quests in RTA, all of them borderline psychotic and all of them as much fun as watching Sophie Ellis Bextor running across a beach naked. To give you an example; one early task is to recover a peach for a ravenous car and you have to violate the country code and ram the tree to dislodge the fruit, which you can then take back. They get a little more complicated, but you get the serene idea. A talking car you may be, but a mercantile and money-grabbing one also. Only damn fools and Christians do tasks for free, and every task you complete in RTA nets you cash (oddly, you can name the currency in the game. Avoid using gynaecological words just in case your mum/sister/girlfriend sees it and kicks off. I know from experience), and, as every PC owner will testify, cash means upgrades. With enough money in hand (boot?), you can upgrade just about every facet of your pigmy-car: wheels, colour scheme, spoilers, carapaces and wings to name a few. You can find yourself locked in the endless fascination of the customising section for hours, before realising that this is, in fact, the icing and not the cake. You can even buy an advertising board to zoom about with and make money per mile as you advertise the local coffee shop. Genius! Also hidden throughout the game are ‘Choro-Q Coins’ (missed some of the translation, eh?) which swell the coffers.

One factor that sullies the surreal joy of the quests is the lack of any real navigational help. You can plunge into many of the buildings you pass, but only a fraction of them have any kind of demarcation to let you know what’s in there. As you amass tasks and move to more exotic towns, remembering who was where can lead to frustration, and the tranquil joy of the game can verge upon the kick-cat-in-frustration barrier. Thankfully, the game lets you warp between towns once you have found a garage, so the frustration is palliated a little, if not wholly.

Using the RPG analogy; if the tasks in RTA are like the ‘fetch and carry’ quests in an RPG, then the racing sections are the combat. Not only is RTA gunning for the ‘mad Jap game’ crown, but it has headlights set on the Gran Turismo accolades as well. Racing takes place on some unorthodox tracks (like a ninja temple) and employs a ‘licence’ system in Gran Turismo homage/rip off. Finish in the points in enough C class races to obtain a B class licence, and again up to A class. If you feel the need, you can even recruit 2 team mates to race with you, but they have the intelligence of a toilet brush, and the only help then can offer is to swerve all over the track and crash more times than Windows XP. If you were expecting precise car handling and track dynamics in RTA, you are a bigger fool than the man who turned down the Beatles. Control is more Wacky Races than WRC; driving physics have gone to hell, and it’s a blast. You can even drive underwater ferchrissakes! Although frustrating until you have kitted up your car with a decent engine, the handling and dynamic is just right, making it an enjoyable romp and ideal for younger gamers, which is not to say that RTA is a child’s game in the least.

It’s a big old world out there. Well, actually, as we’re only one of several billion galaxies, each containing millions of systems, that’s not entirely true. But the game world in RTA is expansive enough for weeks of happy exploring. There is such a wealth of small, innovative ideas that cynical companies could release as a game unto themselves. In each town are several photo shops, and you can amass a whole album of snapshots of your car posing at various areas of the game. There is also a place called ‘My Town’ that lets you populate it with certain cars you meet (barge) during the game; it’s hardly ‘Civilisation 4’, but it’s a wonderful distraction. You can also indulge in a quick race mode, or play some wicked little mini-games to make Super Monkey Ball weep in longing, such as golf, football or (best of all) roulette.

Those expecting outstanding graphics will be much affronted by RTA. The aim is cartoon rather than realism, and there are some frame rate stutters; even when in open fields. However, when you consider that the game is rendering a vast world with only very brief loads (and that’s only when you enter a building), the poor optimisation is acceptable. The cute cars range from sweet rubbish vans to garish monstrosities that Giger would have been proud of. And don’t even thing about turning over the in-car radio; one of the tracks is offensive J-pop that will make you want to gouge knitting needles into your ears. Despite that; for a tenner, RTA offers a refreshing experience with sublime value for money; well advised if you can overlook some of the minor floors…this is one sassy chassis!