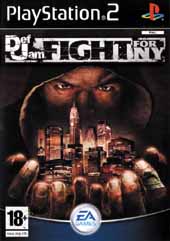 The game's takes place immediately after Def Jam Vendetta. D-Mob (Christopher Judge) is arrested by NYPD officers Starks and Jervis and placed in the back of their squad car when a black SUV hits them, causing the car to flip overs on its back. D-Mob crawls out of the wreckage and boards the SUV as Starks catches a glimpse of the suspect before passing out. He later describes his physical appearance to Lauren. The suspect becomes the game's main protagonist.

At his crib, Blaze (Method Man) and Sticky Fingaz are playing a video game (sounds from the previous game is heard) and Doc (Redman) is sleeping on the couch. The duo are surprised when D-Mob arrives, believing he was still under arrest. Praising the protagonist for rescuing him, D-Mob tells Blaze and Sticky that he's in but the duo wants to see his skills. After defeating House, Blaze becomes impressed while Sticky remains unimpressed. D-Mob then gives the protagonist $750 to dress the part and begins scheduling fights for him. Wanted by the police, Blaze gives the protagonist a crib to stay in hiding. The protagonist then begins to defeat numerous fighters, gaining notoriety after defeating O.E. (Omar Epps). O.E.'s defeat soon impresses D-Mob's fighters like Ludacris.

After the protagonist defeats a fighter from The Limit, Blaze tells him that four female fighters have taken an interest in him. Among these women fighters are Cindy J, Kimora Lee, Lil' Kim and Shawnna. When the protagonist approaches one of them, their boyfriend Nyne warns him to back off and attacks him. If the protagonist wins, Nyne's girlfriend will become his girlfriend. If the protagonist loses, he is console by Shaniqua and she becomes his girlfriend. Scheduling a match against Ice-T, the protagonist defeats him. As D-Mob hands him his prize money, they are greeted by Crow (Snoop Dogg), the game's main antagonist and his henchmen: Magic (Busta Rhymes), Crack (Fat Joe), and Trejo (Danny Trejo). Warning D-Mob that Club 357 will be under his control, Crow announces he is accepting fighters in exchange for real money. The announcement causes D-Mob to lose some of his clubs and several of his fighters siding with Crow, like WC.

Arriving at Club Murder, the match turns out to be a cage match. Defeating Crack, Crow leaves the arena angrily as the protagonist, Blaze, and D-Mob celebrate in his limo. As D-Mob gives the protagonist a pendant and welcoming him into the family for everything he has done, a car pulls up next to them and Trejo opens fire with his Uzi. Attempting to drive off, the vehicles crashes into a lamppost and Trejo, Magic, and a third assailant make their escape into the 125th Street Subway Station. As D-Mob and Blaze remain in the wreckage, the protagonist chases down the trio as Magic and Sticky, who join Crow's crew, boards a subway which leaves the station. Despite having a clear shot, Trejo's uzi is out of bullets and engages in a fight with the Protagonist (the latter has the option to throw Trejo onto the train tracks, where he is hit by a train. Regardless of doing this or simply knocking him out, he does not appear in the rest of the story line). Returning to the limo, the protagonist tries to get D-Mob out of the wreckage but D-Mob tells him and Blaze to escape as he is to injured. The police arrive at the scene, forcing the protagonist and Blaze to leave D-Mob behind.

Returning to the crib, Blaze takes D-Mob's place. Despite wanting to retaliate, Blaze tells the protagonist to continue fighting Crow's fighters to win more clubs as Doc, waking up, joins in. Along with Ludacris, the trio takes control of the Terror Dome, the Syn Energy Power Plant, 7th Heaven, Hunt's Point Scrap Yard, and the Foundation. Arriving at the Chopshop, a team tournament sponsored by the magazine company The Source, is being held where the winning team wins a large amount of money and a customized black Cadillac Escalade. After Magic approaches the protagonist's girlfriend, he enters the tournament and picks either Ice-T or O.E. as his partner. Reaching the final round, the team faces Magic and the partner the protagonist didn't choose as his partner. Defeating them, the protagonist and his girlfriend ride out of the arena in their new car before giving Magic and his partner the finger.

As the player continues to rack up victiories and chips away at Crow's empire, Crow continually tries to get the player to join his side, but fails (One of the first attempts consists of Magic threatening the player in a parking lot after a cage fight with Lil' Flip at the Gauntlet - this results in the game's only Demolition Match). Finally, Crow resorts to kidnapping the player's girlfriend and forcing him to retake all the clubs he has earned for D-Mob's side, one by one, an apparent betrayal that angers the rest of D-Mob's crew. Crow warns the player that if he tells anyone the real reason for his change of sides, the player's girlfriend will be killed.

With the last club won in a fight against Doc (before which a distraught Blaze angrily takes D-Mob's pendant from the player), Crow claims to have one final task for the player. The scene is moved to an empty scrapyard, where the player finds Blaze brutally beaten by Magic, the final task being to finish him off. The player refuses, and knocks out WC. He and Blaze then battle Crack and Magic. After the fight, the player figures out where his girlfriend is being held, and that Crow never planned on letting her live. He and Blaze rush over to an abandoned factory, where Sticky is about to set the entire building on fire. The player engages Sticky in an Inferno Match and leaves him to die in the burning building. After he wins the fight, he can be seen taking his girlfriend out of the burning building before it collapses. She remains unconscious as the player tries to shake her awake (leaving her true fate undetermined), and enrages the player enough to confront Crow.

The player and Blaze confront Crow at his headquarters, backed up by Crack and WC, whose respect they earned, and the remainder of D-Mob's crew, whom Blaze had cleared the player's good name with. As a rumble breaks out with Crow's gang, the player rushes to face Crow in a final showdown. After a brief stand off involving a gun, given to the player by a repentant Magic, the player decides that Crow is not worth killing. However, an enraged Crow attacks him with a knife hidden in his cane. Crow's attack proved D-Mob's warning, "A beaten dog may fear you, but the second you turn your back he's gonna strike". After a Window Match, (the final match in the game) Crow is defeated, and thrown out the window by the player. The player then takes a minute to reflect after Crow is finished. It is unknown what happened to both crews (except Blaze) after the brawl.

GameCube version: There are features exclusive to PS2 and Xbox that are missing from the GameCube version. The player is restricted to having one voice for the main character - as opposed to the six found in other versions. Eight of the 28 available music tracks are missing. The Gamecube's hardware lacks the light blur effect that permeates on the characters and arenas. Furthermore, certain 3 or 4 player arenas have reduced crowds due to the minidisc space limitations.