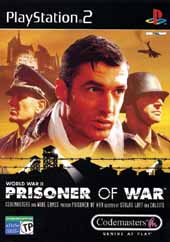 Whilst on a top secret reconnaissance mission for Allied intelligence flying high above northern Germany Captain Stone and his co-pilot Lieutenant James Daly are hit by anti-aircraft fire. Bailing out just in time, Stone parachutes straight into the hands of armed German soldiers. Out numbered and out gunned, Stone is forced to surrender himself to captivity in a POW camp.

On arrival Stone is introduced to life as a prisoner in Germany as well as a variety of interesting characters from around the world. Soon he is reunited with his co-pilot Daly and the pair devise a cunning escape plan involving the theft of German tools from the German's own living quarters.

On the night of the escape disaster ensues, Daly is shot dead and Stone is re-captured and placed in an even higher security camp. Seeking immediate escape and revenge for his fallen comrade Stone contacts the escape committee, a secret group of high ranking POW's who represent Stone's only hope for freedom. First he has to earn their trust and use his legendary reconnaissance and surveillance techniques to retrieve important information for the Allied war effort.

When Stone stumbles across the Germans plans for a weapon of mass destruction, he makes it his duty to inform the Allies and destroy it at all costs; the outcome of the war rests in his hands.

Stone's adventure will take him across Germany in a variety of different POW camps, using his ingenuity and stealth tactics to outwit the German war machine, crawling through muddy tunnels and over stone walls, using disguises and make shift equipment to escape and to prevent the destruction of Allied cities around the world.