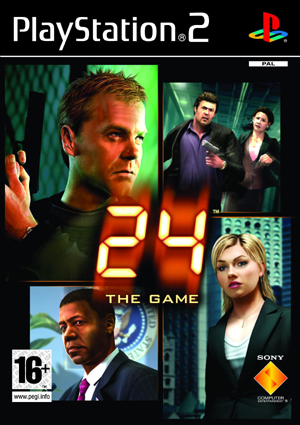 24: The Game takes place between the events of the second and third seasons. In a similar way to the TV series, it can be split up into three sections or chapters. Section one revolves around an attack on Vice President Jim Prescott, while section two covers an attack on the Counter Terrorist Unit (CTU). Section three covers a major terrorist attack and attempt to gain access to nuclear weapons. A large number of characters from seasons two and three feature in 24: The Game, with each using the original actor's likeness and voice acting. Main characters returning include Jack Bauer, Kimberly "Kim" Bauer, Tony Almeida, Michelle Dessler, Chase Edmunds, David Palmer, Max, Kate Warner, Chloe O'Brian, and Ryan Chappelle, with Peter Madsen being voiced by Christian Kane.

The game begins with Jack Bauer waiting outside a ship in Los Angeles harbor where terrorists are going to release a ricin bomb in the water supply. A CTU team member triggers an alarm causing Jack and his team to storm the ship, discovering the whole ship's crew dead in a cargo hold. He later learns of an assassination attempt on Vice President Prescott through undercover agent Chase Edmunds. Foiling the attack, Jack discovers that the mastermind behind the attempt is an enemy from his past known as Peter Madsen.

A Sarin gas attack on an L.A. Metro station lures CTU agents away from their headquarters. While distracted, terrorists activate an EMP, attacking and taking over the CTU LA main building, holding the staff members hostage. The terrorists execute these hostages, including data analyst Sean Walker and eventually escape with a stolen hard drive. Jack runs into Peter Madsen, who has kidnapped Jack's daughter, Kim Bauer, forcing Jack to do "errands" for the terrorist cell. One of these errands is to sneak into a NSA building and retrieve confidential data for the terrorists. Jack manages to find and rescue Kim and recover the stolen hard drive with the help of undercover agent Chase Edmunds.

A major earthquake occurs in Los Angeles, caused by terrorists detonating explosives at focal points (places where fault lines intersect). Kate Warner is also kidnapped by the terrorist cell, along with Governor James Radford who is kidnapped for assassination but is then rescued by the CTU. A conspiracy involving Radford in the day's attacks is uncovered by the CTU and Radford is killed by the terrorist cell because he attempts to back out. Fort Lesker, U.S. Military base and the epicenter of the earthquakes, is attacked and taken over by terrorists, who then begin stealing weapons-grade plutonium before attempting to smuggle the weapons out of the U.S. to the Middle East. Kate Warner's father is forced to aid the terrorists by helping them smuggle the weapons with his customs passes. Jack finally kills Madsen when he tries to escape by shooting his speedboat with an M-80 assault rifle, causing it to explode. He also shoots and kills Max, the man behind the events of Season 2 and The Game, who was holding Kate Warner hostage, saving her life but in doing so Max manages to shoot Jack once in the stomach before dying. As a result, Chase Edmunds takes Jack to the hospital via helicopter.

Like the series, the game takes place over 24 hours and has the same start and end clocks for each hour, marking the start and end of each part of the game. The hours are broken down into 58 separate missions, of which there are three broad types, each described in further detail below. Some missions are objective based, while others have a time-restricted element. Each mission is graded out of 100 points, based on the quality of performance, number of objectives completed, shooting accuracy and so on. A grade of 90 points or higher rewards the player by unlocking some form of bonus feature, including three movies (interviews with cast about the game, TV promos), 98 images (wallpaper-like images of main characters) and 23 characters (3D models that the player can view).

Most of the game's missions take place in third-person shooting format, combined with the use of a cover system. When a character is behind a low object like a crate, or at the edge of a corner or doorframe, they can press a button to use the object or edge as cover. Another button will allow the character to peer around and enter a targeting mode, while releasing the button will quickly return them to cover. There is also a stealth mode which has the character stoop, walk silently (unless running), duck behind any low obstacles they can hide behind and be less detectable by sound. A character can sneak up behind an enemy using stealth mode and perform a silent "stealth takedown" by breaking his neck.

A variety of weapons are available including handguns, automatic weapons and shotguns, with various ammunition types also in existence. Ammunition is limited in the game and weapons must be reloaded, although additional ammunition can be collected. Players can also call out to enemies who will sometimes surrender and can then be captured (put in handcuffs) with their ammunition also collected. There are also civilians in the game who can also be called out to and then rescued by the player. Health bars for enemies, vehicles or friendly subjects that must be protected are also sometimes shown. There are health packs which can be picked up, as well as health stations mounted on walls which can be used. Body armor is also sometimes provided or found in levels. A small heads-up-display features a radar/map with an arrow showing the character's direction, red dots for enemies, green dots for civilians, and yellow stars for objectives. The direction and field of vision of enemies is shown on the radar.

In third-person missions and occasionally some other types, a PDA is available. In the PDA the player can view their list of objectives (which can change over the course of a mission), maps of the area if available, a help screen and a list of weapons held with information on each. Characters also typically have cell phones which they sometimes receive calls on during missions. Some missions involve sniping using first-person shooter gameplay. These missions resemble the use of a sniper rifle during normal missions but the player cannot switch to a third-person view.

There are several missions in which the player controls a motor vehicle. Though the game engine is the same as the third-person mode, these missions are based on being in a vehicle. They usually involve getting to a certain location in a certain time period, often while avoiding pursuers while heading to the end point. Weapons can not be used while in a vehicle. While the PDA is not available in these mission types, a map of the city is. Cell phone calls are also sometimes received in these missions.