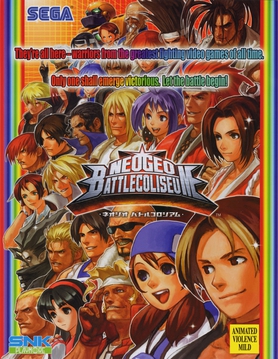 The game system of the arcade NGBC, as previously mentioned, is a 2-on-2 tag battle, regardless of how many players are playing. While the two-player game system is similar to most tag-team systems of other games, the single player system is unusual.

The game's single play is more like a survival battle, where the player must beat enemy after enemy as long as possible. However, the game gives the player 300 seconds, and when time-out occurs, instead of win or lose, the player will face the boss (depending on how well they perform). Only at this point will time-out determine the victor.

During a single-play, the rule is to defeat either member of the team, not both team members. That is, unlike most tag-team systems (but similar to Kizuna Encounter or Tekken Tag Tournament), where all opposition must be beaten in order to win, in NGBC the player only needs to beat one member of the opposite team to win, without the need to fight the other member if the first is defeated.

The survival battles are divided into rounds of three battles