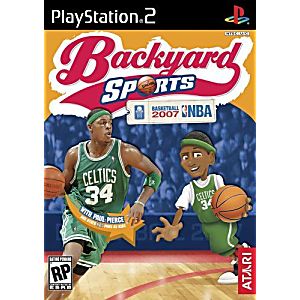 Backyard Basketball 2007 is a sports game released late 2006. This is the fifth iteration of the Backyard the game is Paul Pierce of the Boston Celtics. It was released for Microsoft Windows, PlayStation 2, Game Boy Advance and Nintendo DS. A planned release for the Nintendo GameCube was cancelled.

Like the other Backyard Sports games, Backyard Basketball is notable because it features real teams and players in a much younger environment. The game features all 30 NBA teams as well as 6 made-up ones created for this game. About 18 NBA players are featured in this game, with the rest of the selectable characters filled in with kids from the Backyard Sports franchise. The 3D models bear a pretty decent resemblance to their NBA counterparts, from Yao Ming's height, to Carmelo Anthony's corn rows and Dirk Nowitzki's long face. Their statistics seem thought out as well, right down to Shaq's low outside shooting abilities.

The main game is 3-on-3 basketball, played on dinky, kid-sized courts. Each player can shoot, pass, sprint, pump fake, spin and steal, which all work together well without getting too complicated or confusing. Characters move around smoothly on the court and the camera does a good job at keeping all the important action in frame. The perspective is horizontal instead of vertical for some reason, which can make the hoops tend to pop into frame instead of being seen from down the court. But the courts are small enough that this doesn't hurt gameplay too much.