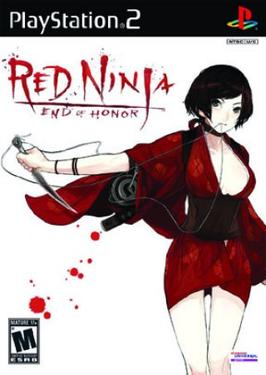 Red Ninja: End of Honor, known in Japan as Red Ninja: Kekka no Mai (Reddo Ninja Kekka no Mai) ("Red Ninja: Blood River Dance"), is a 2005 video game for the PlayStation 2 and Xbox platforms, created in a collaboration between the game developer Tranji Studios and the film writer Shinsuke Sato. It was published by Vivendi Games. The game's theme song was performed by Yoko Ishida.

A young girl's world is destroyed when she and her father are attacked by the Black Lizard clan. After witnessing the brutal execution of her father Ryo, the girl is brutally hung with a tetsugen ("iron string", or "wire") from a tree and left to die. Miraculously, she survives and is rescued and adopted into a ninja clan where she obtains complete mastery of her adopted weapon, the tetsugen. Pledging her undying loyalty to her new family, Kurenai now lives to avenge her father's death and will go to any means necessary.

Red Ninja employs a third-person perspective with a limited rotatable camera. Enemies are dispatched with either a kunai blade or fundo (a blunt iron weight) attachment to the tetsugen. The tetsugen also has a hook attachment that allows Kurenai to swing to various places. Melee attacks can be performed with either the blade or fundo. By repeatedly annihilating enemies and avoiding injury, Kurenai can build her ninjutsu gauge, which allows her to enter a sort of "bullet time" in order to more efficiently eliminate enemies. When Kurenai is being chased by three or more enemies while targeting one of them, she can perform a powerful melee attack to annihilate all enemies in range.

However, as Kurenai is without armor and significant reach (enemies are armed with bows, spears, or katana), most battle encounters will either injure her seriously or kill her outright. It is best to avoid physical altercations either by sneaking, stealth-killing, or using Kurenai's feminine charm to eliminate threats. Stealth attacks are possible when Kurenai sneaks up on an enemy undetected or uses the blade to slice off an unaware enemy's head from a distance. A seduction stealth kill is also possible to perform on a single enemy: during such an attack, Kurenai will perform a vaguely suggestive activity and when the enemy approaches, will drag him down and kill him. Bodies of dead enemies can be dragged in order to conceal Kurenai's presence from the enemy, though only decapitated or defeated enemies can be dragged (in other words, Kurenai cannot pick up two separate halves of a body to hide them). The game is impossible to complete without killing people.

Kurenai has several different methods of moving. In addition to running, walking, and jumping, she can stealth walk in order to creep up on enemies or move behind low barriers. She will stealth run if an enemy is targeted, unaware of her presence, and she is being made to run. Kurenai can also wall-jump, that is to say jump from surface to surface, up to three times in order to surmount large obstacles. Kurenai can flatten herself against certain walls, cling to ledges, hang upside down from her tetsugen to kill people, and if she is running fast enough, can zoom straight up walls until she either runs out of momentum or smashes into something. Wall running cannot be done on all walls, and can only be done if Kurenai is running at full speed. If Kurenai is crouching, she can also roll rapidly when the jump button is pressed. When faced with tight, narrow spaces, Kurenai can dislocate her right shoulder in order to go through.

Areas can be navigated by looking at the (anachronistic) sonar circle in the corner. A green circle signifies successful infiltration, while yellow, orange, and red signal caution, alert, and full-out alarm/attack modes. Enemies are represented by arrowheads, with the point of the arrow being their direction of vision. A white X indicates the general direction Kurenai should go in order to complete the mission.

As the power of the samurai class fades, Japan turns to the ninja to uphold political power during chaotic times. One such ninja, Kurenai, lives to avenge her father's death and will go to any means necessary to destroy the Black Lizard Clan. Kurenai is a master of the tetsugen, a wire weapon that can cut off an enemy's head or hang them from a tree, depending on the end attachments used and the length and strength of the weapon's wire. Aggressively employing such tactics as wearing disguises, using womanly wiles, and controlling Ninjutsu powers will help you to escape enemies.

Japan in the 1500's, the power of the samurai class is fading and the use of the Ninja has become necessary to hold any political power in this chaotic time. Kurenai a young girl who?s world is destroyed when she and her father are attacked by the deadly Black Lizard Clan, who captures her and brutally hangs her by a wire and left to die. Miraculously, she survives and is rescued and adopted into a clan where she obtains complete mastery of her unique weapon, the wire. Kurenai has pledged her undying loyalty to her new family. She now lives to avenge her father?s death and will go to any means necessary to destroy the Black Lizard Clan.